What is Earthquake Retrofitting?

Earthquake retrofitting Los Angeles buildings involves securing each structure to its foundation to prevent displacement and structural damage during an earthquake. Many buildings in Los Angeles built before 1980 weren’t constructed to adequately withstand seismic movement. As a result, these older buildings are more susceptible to structural damage during an earthquake.

According to scientists, California has more than a 99% chance of having one or more earthquakes with 6.7 or greater magnitude within the next 30 years. Thanks to close proximity to the active San Andres Fault, Los Angeles is likely to suffer billions of dollars in damage from a large magnitude earthquake. During an earthquake energy built up and stored for many years can be released in minutes or seconds. This violent release of energy causes rapid shaking, ground motion and soil collapse.

Take a look at these two homes in Napa, California. Northern California’s most powerful earthquake in years struck in 2014, jolting two homes standing side by side on a residential block in Napa. Many houses shook violently, but these two neighboring houses had very different outcomes.

When the shaking stopped, these neighboring homes were in dramatically different condition. Years before the magnitude 6 temblor the blue house was seismically retrofitted and emerged from shaking largely unscathed. The yellow house didn’t have earthquake retrofitting protection and was battered, the foundation torn up and the porch columns grotesquely distorted. 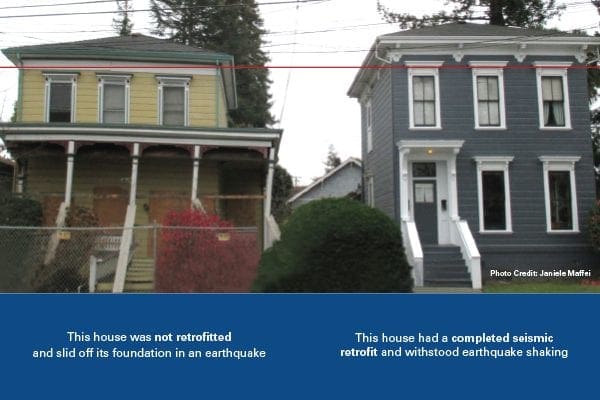 Los Angeles is a hot bed of seismic activity. In an earthquake, the lack of grip between house and foundation can cause a home to be shoved off — as if a rug is being pulled out from under the house, breaking the home’s knees. There are at least a million homes in California with a defect that puts them at risk of sliding off their foundations in an earthquake. These defects are more common in homes constructed before 1940 but also exist in some homes built before 1980.

While there isn’t a standard cost for earthquake retrofitting a home, the price range is usually $5,000 to $10,000. Larger homes, those built on hillsides, and those with basements or rooms over garages typically cost more to retrofit. There are some huge benefits in choosing to retrofit your Los Angeles home.

How do I know if my foundation can be repaired?

Do I have foundation issues that need to be repaired?

What is the average Los Angeles soft-story retrofitting cost?